On 1 January 2013 the districts were formed as the lowest level territorial and organisational units of the public administration, situated between the levels of settlement and county. Act XCIII of 2012 provides regarding the formation of the districts, and the legislative amendment of related Acts. The duties, competencies rules, professional management bodies, professional management as well as the seats of the district offices and their competency areas are regulated by the Government Decree 86/2019. (IV. 23.). There are 197 districts, 23 of these are in the capital. 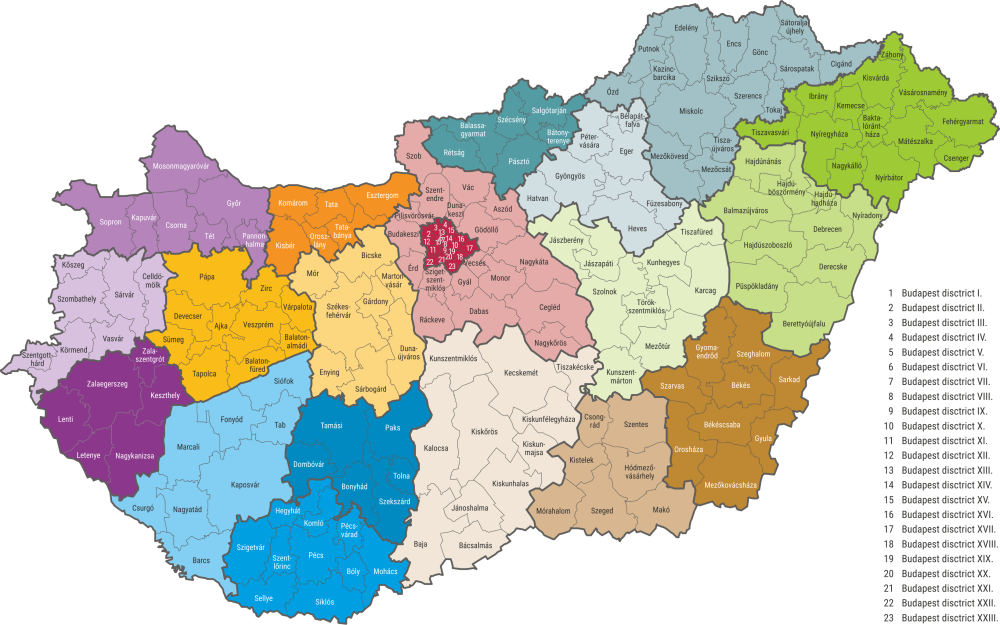 The system of districts in our country, forming the territorial level between the settlements and counties, goes back many centuries. The earliest districts were formed in the 13th century, as an administrative, managerial body, not as a local government. Since the territory of the county was too large to keep a daily contact with the settlements, it was necessary to form a territorial unit to be traversed by horse or carriage in one day, hence the name (járás (district) = traveling, traversing). In the Middle Ages, they performed - through constables - tax censuses and collections mainly, as well as justice related tasks. In those times the borders were assigned based on relief and hydrographic features, and by taking into account the headcount of nobility.

The setting and functioning of the districts changed several times during the centuries. As a result of the 1949–1950 administrative reform the district level was integrated into the council hierarchy. The role of the district in the local government was short lived, it was dissolved in 1970, transformed in administrative district office. Since 1984 the district as territorial unit ceased to exist, settlements were enlisted into urban neighbourhoods and put in the charge of the centrum-settlement’s council, then, by the end of the 1980’s this territorial division was terminated as well.

The sub-region was a geographically coherent territorial unit between 1994 and 2012, serving mainly regional development and statistical purposes. Although the sub-region was close to the district by size, it cannot be regarded as its successor, as it did not define the competences of the outsourced bodies of the higher administrative levels.

The present district system, formed in 2013, is different from the previous forms, as it is a new organisational system with new goals. The Government Decree set the goal of creating a more efficient, cost saving and customer oriented administration, warranting a one-stop administration.

The settlement number of the districts spreads within broad limits. The Debrecen and Hajdúböszörmény districts have only two settlements, while the Zalaegerszeg one has 84.

The most populous district is the Miskolc one, with 235 thousand people. 30 times more people live here than in the least populated Bélapátfalva district. There is not quite as big a difference area-wise, the Kaposvár district (1,591.4 km²) is 15 times larger than the smallest rural district, Dunakeszi. Among the capital’s districts the VII one (2.09 km²) is 26 times smaller than the largest, the XVII district (54.8 km²).