Eurostat created at the beginning of the 1970s the NUTS (Nomenclature des Unités Territoriales Statistiques) classification system with the purpose of assigning commensurable, comparable territorial units from area and population size point of view, in order to collect and produce uniform regional statistics. In the beginning the nomenclature contained 5, hierarchically built territorial levels. After the classification was incorporated into the Community legislation the 3 upper levels were recorded in this Decree, while the member states continue to inform the European Commission regarding the data of the 2 lower territorial levels based on their common, multilateral agreements.

Regulation (EC) No 1059/2003 – amended several times – creates the legal framework for the classification of territorial units; the Regulation is reviewed every 3 years by the Community. The relative timely stability of the legislation is important from statistical point of view, as it helps in assuring that data is going to refer to the same territorial unit when analysing the timely changes and changes in administrative boundaries will not affect the results.

The system is built up hierarchically, dividing the member states into NUTS 1 units, these are further divided into NUTS 2 units, and these into NUTS 3 units. Population threshold values determine the ranking of an administrative unit into the NUTS levels. The system describes – according to the present legislation in force since 1 January 2018 - 104 NUTS 1, 281 NUTS 2 and 1348 NUTS 3 level territorial units. In Hungary large regions correspond to the NUTS 1, the planning and statistical regions to NUTS 2 and the counties to NUTS 3 territorial levels.

The NUTS system is primarily based on administrative units, however in the case a member state does not have a territorial unit sized corresponding to the definition of the given NUTS level, this NUTS level has to be formed by merging a sufficient number of adjacent smaller administrative units in a way that it will contain similar, coherent territorial units from social, economic and historical point of view.


The goals of the hierarchical NUTS system: 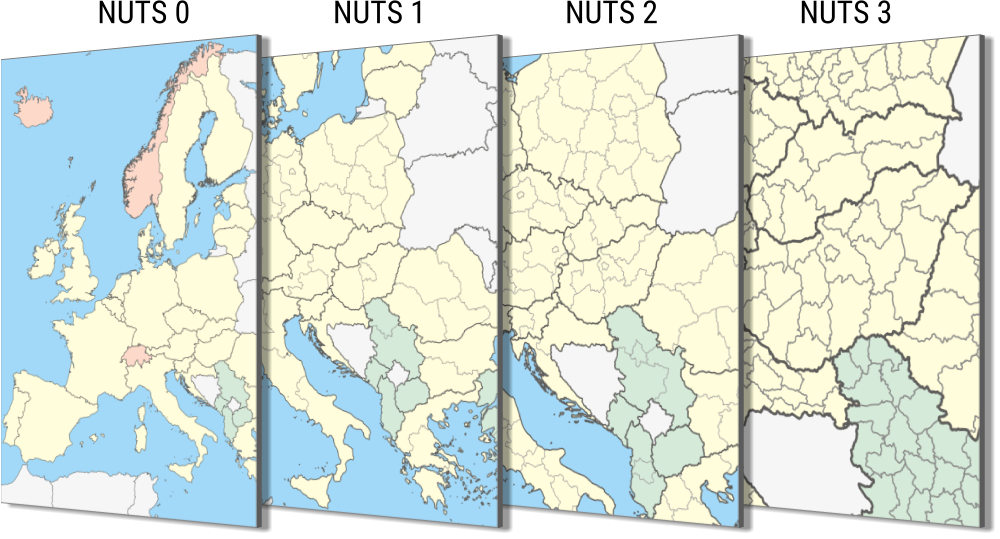 National Statistical Offices conduct joint statistics – based on multilateral agreements – regarding local levels. The demand for detailed territorial data was always high in the Community, and, although the 2003 Decree did not stipulate the territorial units below the NUTS 3 level, Eurostat continued to monitor them. In accordance with the NUTS system Eurostat set up the Local Administrative Units (LAU) system as well. Previously there were two levels in this system, since 2017 their number dropped to one. In Hungary settlements correspond to the LAU level territorial unit.


Further information about the NUTS classification to be found on the Eurostat website.