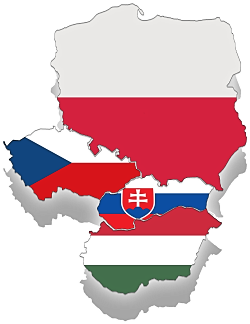 The four countries are connected not only by a common history, geographical closeness and present economic links, but also the cooperation of the NSI-s dating back to the last century. Preceding the accession to the European Union in 2004, they published the main indicators of their countries in a common quarterly bulletin between 1993 and 2004. The four countries contribute by more than one tenth of the area and population, nearly 6% of economic performance based on GDP, about 8% of manufacturing of motor vehicles and almost one fifth of cereals produced in the EU.

This memorandum creates opportunities for developing a more efficient cooperation, for information sharing, for enlarging the possibilities of exchange of views and experience, as well as for adapting the methodological developments of the countries. Moreover, the NSI-s of the four countries will present the major national indicators in a joint publication each year, the first issue of which was published at the time of signing of the memorandum. 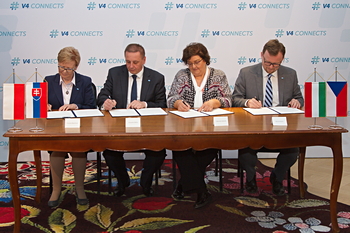 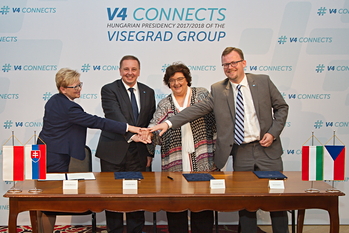 According to the mutually accepted memorandum, the Presidents of the four NSI-s will meet on a yearly basis and regularly discuss the possibilities of effective cooperation. A closer partnership is primarily focusing on sharing best practices and methodological developments, however, the common agreement provides an opportunity for exchange of various datasets as well.

The fields of cooperation are centred around current challenges, such as the use of administrative data in the next population census and farm structure survey, or issues of regional statistics and geostatistics. Income, consumption, wealth, as well as foreign trade mirror statistics, methodological issues related to migration and to time use surveys are also addressed within the cooperation. Attention also is given to the use of big data from smart devices in official statistics, and last but not least participants are going to discuss the cornerstones of statistical dissemination, their users and the usefulness of the platforms accessible to them.

„The cooperation of the Visegrád Group Countries dates back to the 14th century, however, the present relations of the V4 group require a more active participation of the NSI-s in the common work. While the cooperation among the four countries has been productive to date, we would like to further consolidate these ties. The fact that the present cooperation is undertaken by four national statistical institutes of such high standards, is a guarantee for the cooperation to become useful for the development of official statistics at the regional and European level’” – said Gabriella Vukovich, President of the Hungarian Central Statistical Office during the Budapest summit.

The yearly harmonization will be directed by the President in line – until 30 June 2018 the Hungarian Central Statistical Office and its President, Gabriella Vukovich is going to coordinate the common work of the National Statistical Institutions.