Enumeration stage of the population census starting on Thursday

The online stage of the population census has ended. A total of 7 million personal questionnaires have arrived in the system from 3.2 million addresses, which means that households have sent the answers from 63.5 per cent of addresses. Households that have not completed a questionnaire online will be visited by enumerators between 20 October and 20 November.

Online questionnaires were completed in all settlements in Hungary. Considering the counties, the highest rate of questionnaires was submitted in Pest county (71.7 per cent), followed by Győr-Moson-Sopron county (69.5 per cent) and Fejér county (67.5 per cent). Of larger cities the highest rate of questionnaires was sent from Érd (with a completion rate of 79.7 per cent), followed by Székesfehérvár (75.1 per cent) and Szeged (72.4 per cent). In Budapest, online questionnaires were submitted from 70.8 per cent of addresses. As for the districts in the capital city, District XVII (81.2 per cent), District XVI (80.9 per cent) and District XXII (77.3 per cent) came in the first three places. There were 6 settlements where the online completion rate exceeded 90 per cent: 4 in Győr-Moson-Sopron county (Fertőendréd, Harka, Győrzámoly, Győrújfalu), 1 in Veszprém county (Márkó) and 1 in Pest county (Telki). 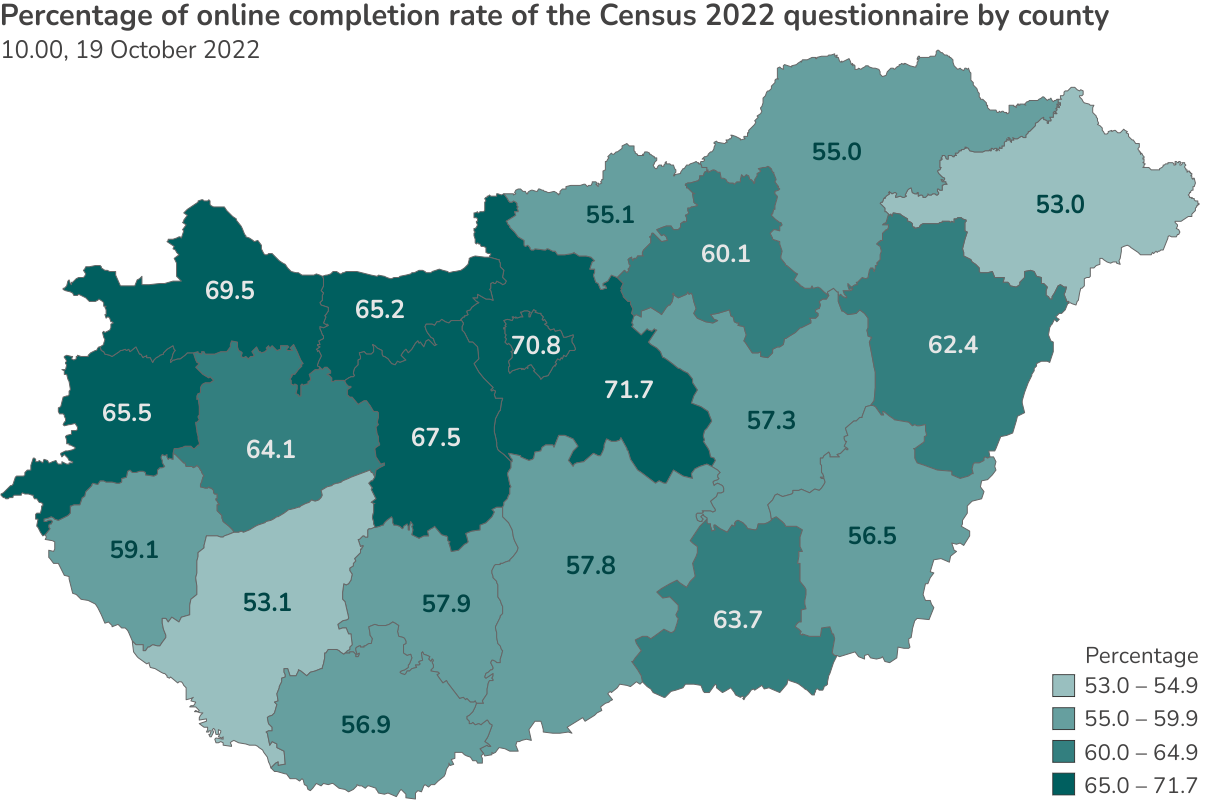 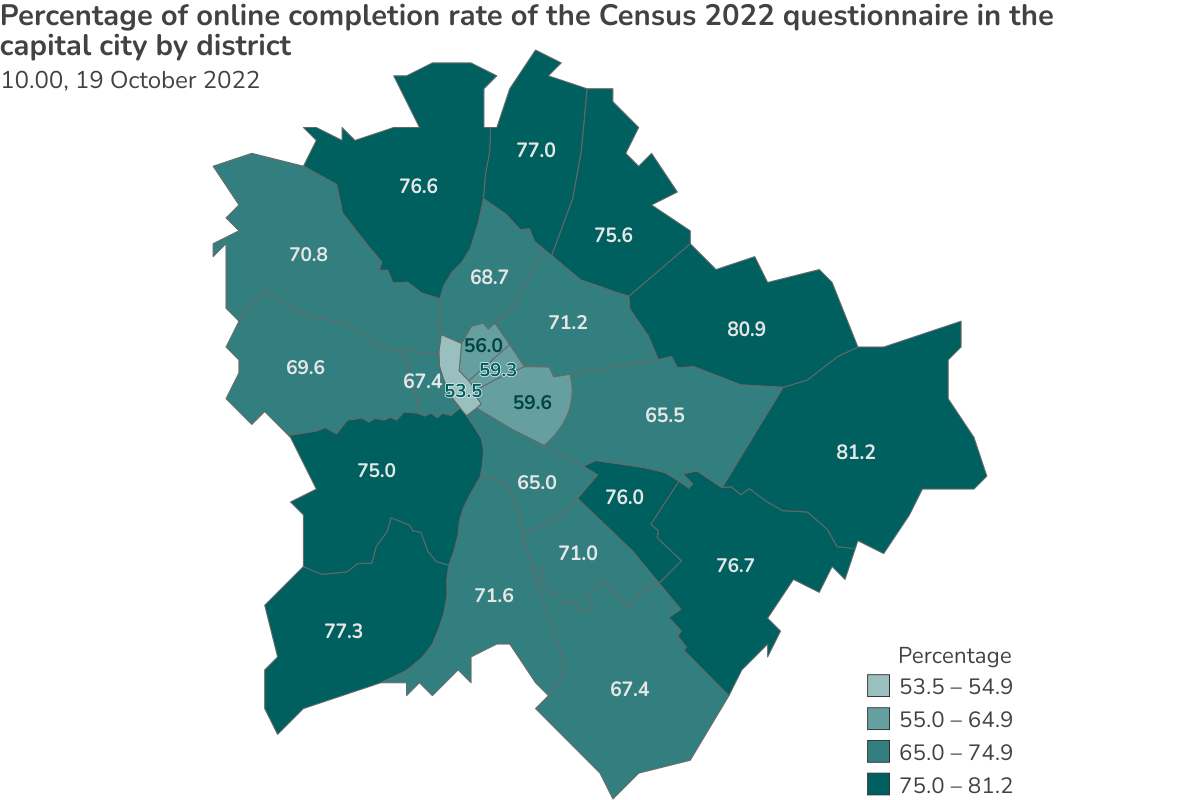 A considerable number of people left the submission of the questionnaire until the last moment. On the last weekend of the online self-completion stage, several times as many questionnaires were sent as the earlier daily average. While by 7:00 AM on Friday, responses had been sent from 42.9 per cent of addresses, the completion rate exceeded 50 per cent by Saturday evening, and reached 60 per cent by Sunday evening. Households submitted more than 1 million personal questionnaires on Sunday.

We take pride in the results of the online completion stage, as in less than three weeks 7 million personal questionnaires were completed at more than 3 million addresses. This proportion in such a short time is considered significant in international comparison, too. This was the first time that HCSO was able to reach so many people via the internet, which we consider a great success. We thank every respondent for their cooperation! We kindly request that those who have not completed a questionnaire online help enumerators with their work in the second, enumeration stage that is beginning now – said Marcell Kovács, HCSO Population Census Project Manager.

The enumeration stage of the population census starts on 20 October. Households that did not complete a questionnaire online will be visited by enumerators between 20 October and 20 November; questionnaires can only be completed with their assistance during this period. Enumerators work both on weekdays and at weekends. If the time is not appropriate to complete the questionnaire, the enumerator leaves a notice in the mailbox, indicating the date of the next attempt to visit and their phone number. By calling this number, citizens can make an appointment with the enumerator, who will next visit the given address at a time that is certainly appropriate for the persons living there.

Each enumerator has their own enumerator card showing their name and unique identification number. This card is valid together with a personal identity card with a photo, that is, a personal identity card, a passport or a driving licence. When an enumerator visits a given address, they have to show their enumerator card. It is possible to call a freephone information number (+36-80-080-143) operating during the whole period of the population census to confirm the identity of the enumerator, after specification of the given household address.

Data provision starts with the completion of the dwelling questionnaire, followed by the personal questionnaires – in the latter case, as many questionnaires are to be completed as the number of persons who live in the given dwelling. The enumerator enters the responses in an electronic device (tablet) and closes the questionnaire. When a questionnaire is closed, the system automatically encrypts the data; upon submission the data directly arrive on the protected server of HCSO.

Reply is mandatory according to the Census Act. Any citizens who failed to comply with their data provision obligation during the online data provision period closed on Wednesday and cannot be contacted by their enumerators during the enumeration stage until 20 November, have the opportunity to contact the notary of their settlement and complete the census questionnaire during the additional stage of enumeration between 21 and 28 November.