The actual structure of the country, comprising 19 counties was established during the county organisation of 1950. The basic principles of the country’s division were established by Act XX of 1949 on the Constitution of the People’s Republic of Hungary, and Act CXXVI of 2010 provides in relation to the Metropolitan and County Government Offices. The name of Csongrád county was changed to Csongrád-Csanád county on 4 June 2020 according to 19/2017. (X. 5.) Parliamentary decision. 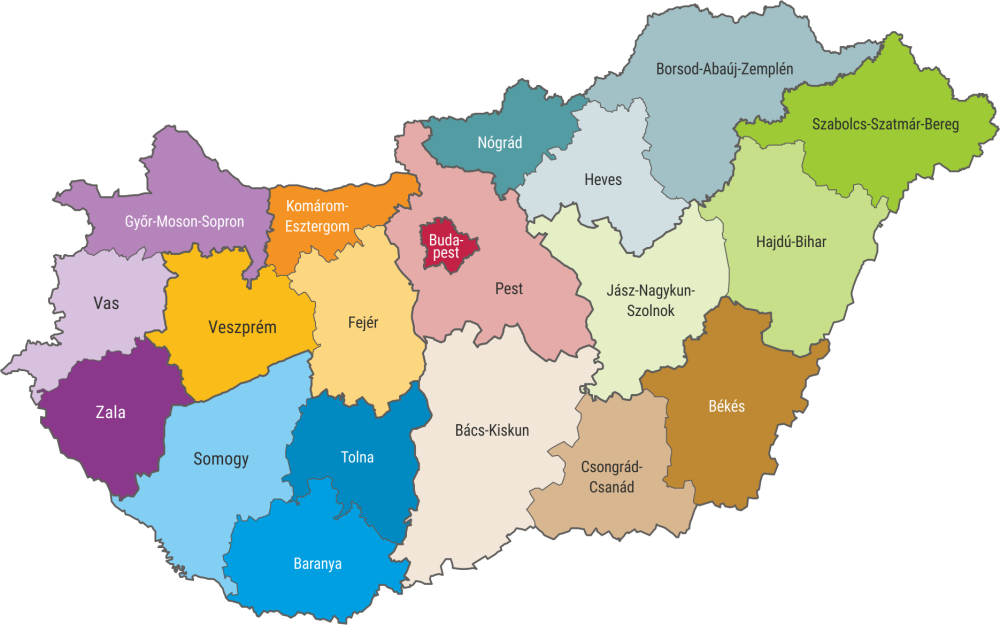 The unit with the greatest historical tradition in Hungarian regional administration is the county. Its characteristic is that in it – under the same name and an almost unchanged territorial framework – the most different administrative and political institutions materialised.

The first form of the county was the royal county established by Stephen I of Hungary. Its formation served the territorial division of the country, free from tribal and clan related influences. The role of the royal county was taken over by the noble county in the 13th century, this being the self-government institution of smallholders and medium landowners and by this institution the nobility gained a direct say in the politics of the country. In the 16th–17th centuries, during the Ottoman rule peasant counties came into being as well, mostly on the occupied territories, as a self defence organisation of the peasantry.

The modernising Hungarian state did not reinstate the noble county, – prevailing up to 1848 – after the Compromise of 1867, in consequence the municipal county existed between 1867 and 1950. The autonomy of the counties was significantly reduced, their competence greatly limited. The Trianon peace treaty affected severely the county system as well: many counties, in part or in total, found themselves located outside the borders of the country. The system of county councils functioned between 1950 and 1990. The new county councils – based on Soviet model – integrated a significant part of the previous state administration, gaining significant competence.

The local government based county was established in 1990, in a legal framework comparable to that of the municipal county. Their competence was basically limited to the administration of their own institutions and management of their own assets.

Among the counties, in Pest county were formed the most (18) districts; Komárom-Esztergom, Nógrád, Tolna and Zala counties have the least (6). The capital contains 23 districts.

There are significant differences between the counties from settlement system point of view. In Zala, Vas, Baranya counties six-seven-tenth of the settlements are small villages with fewer than 500 inhabitants. The proportion of settlements with large population numbers is high in the counties of the Great Plain and Pest county.