In order to facilitate the integration into the reginal politics of the European Union the system of planning and statistical regions was formed, reinforced by amendments of Act XXI of 1996 on Regional development and Regional Planning. According to the legislation in force at present the region “is a NUTS2 level territorial unit according to the Regulation (EC) No 1059/2003 of the European Parliament and of the Council of 26 May 2003, on the establishment of a common classification of territorial units for statistics (NUTS)”. Based on Parliamentary decision 35/1998 (III.20) the country’s territory was divided into seven regions. Since 1 January 2018 the Central Hungary region parted into Pest county and Budapest according to Government decision 2013/2015 (XII.29); in consequence, based on the legislation in force the territory of Hungary is divided into eight planning and statistical regions. 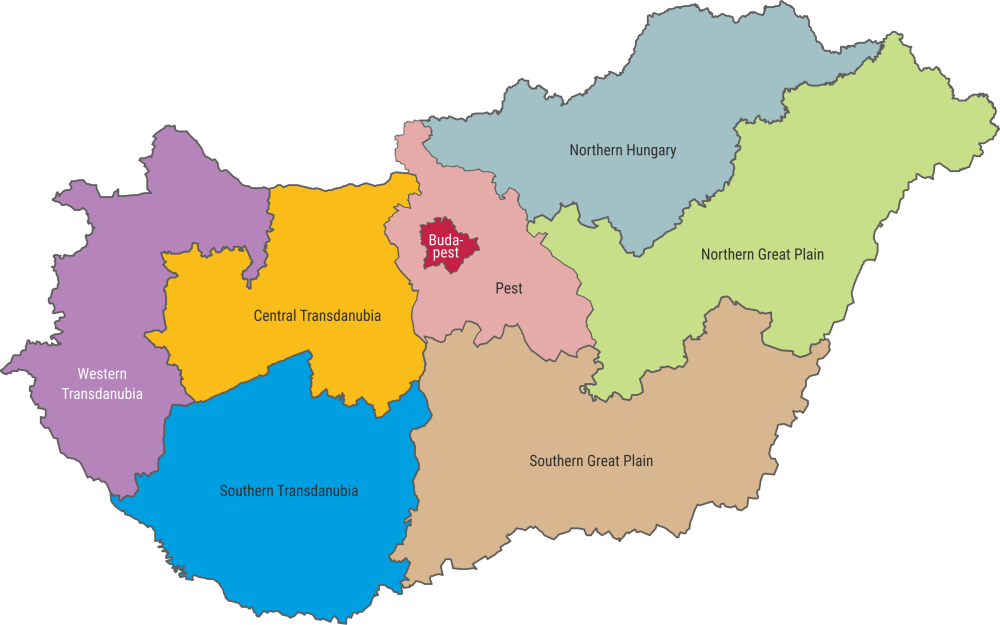 There is no historical tradition in the Hungarian administration of large, provincial level organisation of regions. The base unit of territorial organisation became the gentry-led county instead of the province (shire, duchy) defined by the estates of the aristocracy. The attempts to form larger units met noble/national opposition at county level and failed. Such attempts were the endeavour of archbishop Lipót Kollonich at the end of the 17th century in the part of the country re-conquered from the Ottomans, then the measure of Joseph II regarding the dissolution of counties and creation of districts. The districts formed by Alexander Bach following the repression of the Hungarian Revolution of 1848-49 as well as the regions appearing in 1991, following the regime change, led by the commissioner of the republic, were short lived.

At the same time there are regional traditions in the history of the Hungarian territorial organisation. The territorial organisation of the Catholic Church (episcopates, archiepiscopates), the judicial network at the turn of the 19th and 20th centuries, or certain large organisations (e.g. postal directorates, railway directorates) were built on regional principles. However the country-county connection, forming the base of political power was always stronger than the regional tradition, and prevented the varied regional organisations from becoming a connected system.

As a condition of joining the European Union it became necessary the formation of larger-, primarily serving as planning and statistical –regions, incorporating several counties, as these territorial units are the recipients of the EU regional support.

One-fifth of the country’s population is concentrated in the Budapest region; more than twice as many live here than in the least populated Southern Transdanubia. The territorial dimension of the two Great Plain regions is the largest, the extent of Budapest is the smallest. The population density of Budapest is outstanding, there are fifty times more people per square kilometre here than in Southern Transdanubia.

The settlement systems of the regions are significantly divergent. The Transdanubian regions and Northern Hungary are characteristically small village featured, the two Great Plain regions and Pest are made up of settlements with a larger population number.