Act XVIII of 1871 on arrangement of municipalities ascertained that every settlement has to belong to a municipality. Municipalities meant at the time “small villages”, “large villages” and towns.

Following the 1867 Compromise one part of the royal free cities were transformed into municipal towns, another part into towns with settled council. The former group was independent from the county municipalities, the latter functioned within the municipal framework.

At the formation of the council system municipal towns turned into towns of county rank. The number of towns slowly increased, mainly with the new industrial centres. One-tenth of the municipalities did not have an independent council, these had low population numbers, and as such they did not ensure the thrifty functioning of the councils. The joint council of several villages was the so-called common council. The number of villages belonging to common council administrations significantly increased up to 1990.

By creating the new Act LXV of 1990 on Local Governments every settlement of the country gained local government, autonomy. Before the regime change town rank meant – beside prestige – financial benefits, too, at present town rank does not come with such privileges, however this rank is still attractive. This came with the significant increase of the number of towns, at the same time the result did not bring about a serious increase in settlements able to fulfil town related functions. Settlements with town status are everywhere in the country, there are no regions lacking towns.

According to Act CLXXXIX of 2011 on Local Governments in Hungary the following settlement categories exist at present in Hungary: municipality, large village, town, town of county rank, capital city.

The municipal local government has to fulfil all duties stipulated by the law which ensure the basic living conditions of the local population and the possibility of direct utilisation of public services meant to secure these living conditions.

The title of large village may be used by those municipal local governments which held the large village title at the time when the Act came into force, furthermore they must have at least 3 thousand inhabitants.

According to the Act the town fulfils public services which could be provided on its own territory and its agglomeration economically, efficiently.

Towns of county rank fulfil public services which expand beyond their own limits to the whole county or to a large part of it. These are the county seats as well as those towns with 50 thousand inhabitants or more, and declared by the Parliament as such. (Among the towns of county rank the population of Dunaújváros, Hódmezővásárhely and Nagykanizsa was above 50 thousand people at the time of gaining their legal status; today their population does not reach this threshold anymore).

Settlements of Hungary by legal status, 1 May 2022 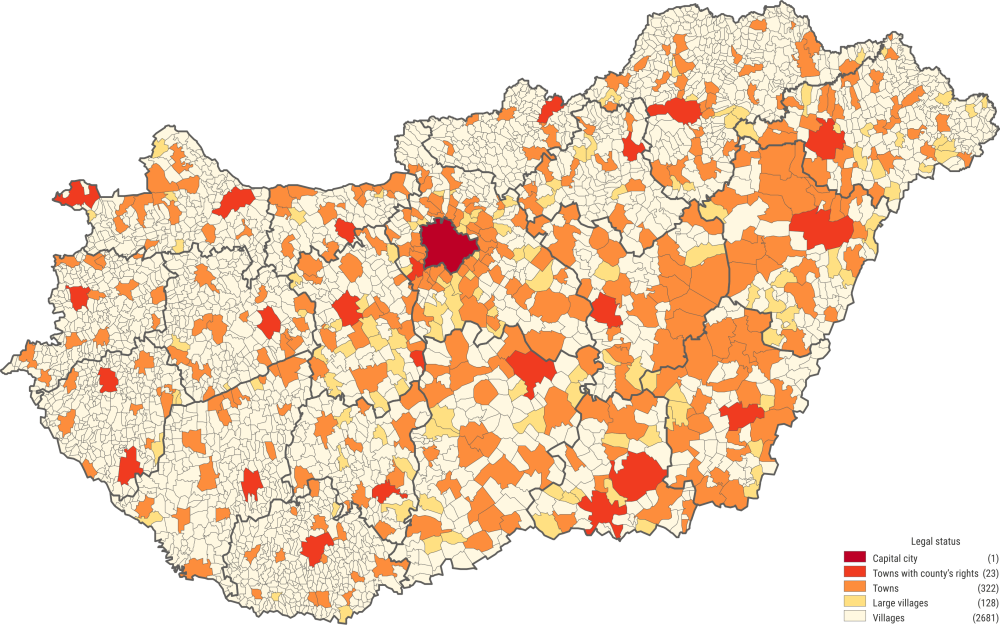 One-third of the country’s settlements are small villages with less than 500 inhabitants, at the same time only 3% of the country’s population live there. The concentration of the population is significant, seven-tenth of the population live in towns (two-tenth in the capital). The particularities of the settlement system could be traced back to natural, historical causes. Typically there are small size- and population settlements on the hill-country and low mountain areas whereas lowlands display larger ones. Historical events had their impact, too: the present scarce network of market towns and large villages formed following the Ottoman occupation in place of the earlier, destroyed system. The territorial disannexations of the Trianon-treaty changed the linkages of settlements in the border region, whereas the centralised management of the agricultural and industrial production influenced the role of the settlements prior to the regime change.

At present the settlement with the smallest population number is Debréte in Borsod-Abaúj-Zemplén county with 8 inhabitants, the most populous is the capital with more than 1.7 million residents. The area of Budapest is the largest, 525 km², while the size of Remeteszőlős in Pest county is less than 1 km².

The presented characteristics reflect the 1 January 2022 situation; at the same time administrative divisions, the status of settlements change over time. According to the 2011 Act on local governments a new municipality may be formed through local referendum on the initiative of constituents from a geographically and architecturally detached part of a settlement which is capable of independently exercising its local government rights and fulfil its duties. Beside separation of settlements these may merge as well: based on local referendum the concerned representative bodies may initiate, through a resolution, the unification of adjoined municipalities as well that of towns and municipalities. The concerned representative bodies may agree on border-area handover, takeover or exchange. The representative body of a settlement may initiate by qualified majority a decision that the Parliament should annex the settlement to the neighbouring county; a local referendum has to take place regarding the initiative. Earlier only settlements with large village status could be declared as towns, now the Act provides that the title of town may be granted to a municipal local government which plays a regional role and its development reaches the level of a town, and as such the large village criteria ceased to exist.